THE DUTY: DECLARING THE KAFIR AS KAFIR 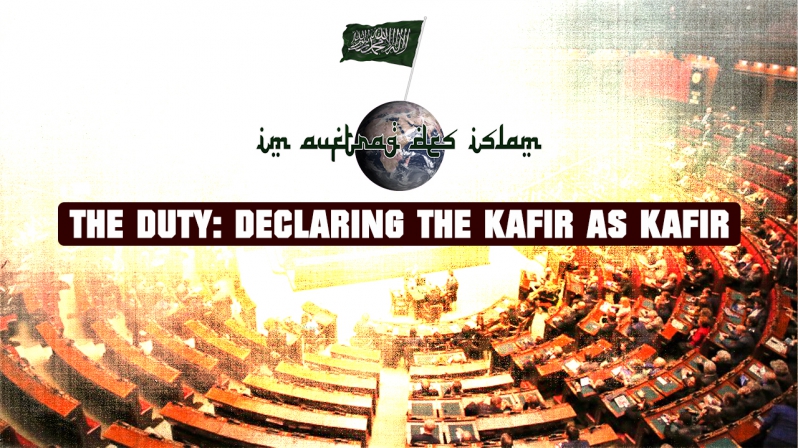 The Duty: Declaring the Kafir as Kafir

If one does not declare the kafir a kafir, he is himself a kafir.

The one who does not regard those who make Schirk as unbelievers or is not sure whether they are believers or unbelievers, or describes their path as right, is himself an unbeliever.

All praise belongs to Allah, who has explained His religion in detail! He explained them to us, either by His Book or the testimonies of His noble Messenger, Muhammad, Allah's peace and blessing on him, who did not speak according to his own desires. We were told how to behave in marriage, upbringing, education, in the use of the law, in disputes, in commerce, at work, in the mosque and in all other areas of life.

Thus He, the Almighty, besides Him there is no one worthy of worship, has explained to us in all the more detail the basis and foundation of His religion, without which all deeds are worthless!

As for the Kufr against the Taghut, Allah the All-Knowing said: "Ye already have a beautiful example in Ibrahim and those with him, when they said to their people: "We renounce you and those whom ye serve besides Allah! We deny you! And between us and you there will always be enmity and hatred, until ye have only Iman to Allah!…“

Allah, the Exalted One, mentioned here the disavowal of the Taghut in His Words "...and him whom ye serve besides Allah!"…“!

Allah, the Almighty, speaks from beginning to end in the Qur'an only of:

Tauhid, Islam, Iman, Schirk and Kufr are acts that one commits and judgments that one receives when one commits them!
Allah, the Exalted, did not say in a single verse, "O Kufr!" or "O Schirk!" or "O Islam!" – NO!

From this sura we learn 3 things:

Although there is talk of the Kafirun from beginning to end in the Surah, the Messenger, Allah's peace and blessing on him, said that it is a renunciation from the Shirk!

Likewise did Allah the Exalted reveal the story of the true Muwahhidin, the Ashabul-Kahf, who renounced their Mushrikin people: "And when ye keep yourselves away from them and from those whom they serve besides Allah, seek refuge in the cave; your Lord will spread (some) of His Grace upon you..."

Allah, the All-Hearing and All-Knowing, again mentioned first those who make Schirk and only then that, to whom they serve, their Taghut! And not only that. Allah, the Exalted, told us here when He will spread His Grace upon us. And only after the losers from the Muschrikin!

So Allah also revealed the words of His friend Ibrahim, Allah's peace and blessing on him: "And I will keep myself away from you and from what ye call upon other than Allah, and will seek only my Lord."
So he renounced the Mushrikin and the one they served beside Allah! Again the Muschrikin were mentioned first! And what did Allah the Exalted say in the following verse?

"When he kept away from them and from him whom they served besides Allah, We gave him Ishaq and Ya'qub: and We made all (both) prophets. And We gave them (something) of Our Grace, and We gave them a high reputation of truthfulness."

They renounced the Muschrikin and the one they served beside Allah! And what did they get for it? "And We gave them (something) of Our Grace..." Allah, the Exalted, always mentioned first the Mushrikin and then her worshippers or her schirk, for it is Mushrikin who commit the schirk and spread it on earth. The Schirk can never just appear by itself, because the Schirk is an act and not something that floats in the air.

Summary: The Muschrikins´ apologists and those who do not make a takfir on the apologists commit 3 Kufr forms:
1) They have no Kufr against the Taghut!

Abdur-Rahman bin Hasan, may Allah have mercy on him, said: "If the servant knew the meaning of'La ilaha illAllah', he would know that whoever doubts or hesitates about the Kufr of those who associate with Allah has not denied the Taghut". [Al-Durar al-Saniyyyah 11/523]

This because Islam is the only work of worshiping Allah with what Allah has called worship, and the absence of any kind of worship. As the Messenger of Allah, Allah's blessing and peace on him, said: "Islam is that thou serve Allah and associate nothing with Him. (Sahih al-Bukhari and Muslim)

And the one who still calls him a Muslim confirms that they are both still on the same religion. And that's true, too! Those who accompany Allah and those who still regard them as Muslims have the same religion - the religion of Schirk! Thus both are unbelievers. May Allah save us!

This renunciation of the Muschrikin is the religion (Millah) of Ibrahim, Allah's peace and blessing on him, whose obeying Allah, the Exalted, has commanded us in many verses. And whoever does not follow this Millah, says Allah Almighty about

"Who will despise the religion of Ibrahim, except who is fooling himself? We have already chosen him (Ibrahim) in this world, and in the Hereafter he is one of the righteous." 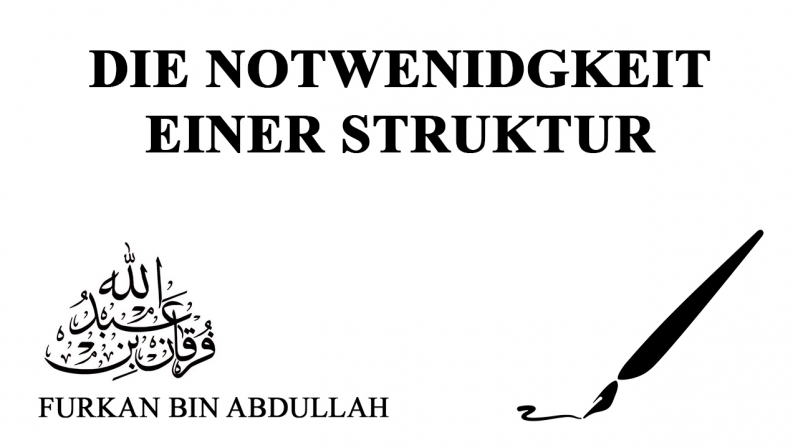 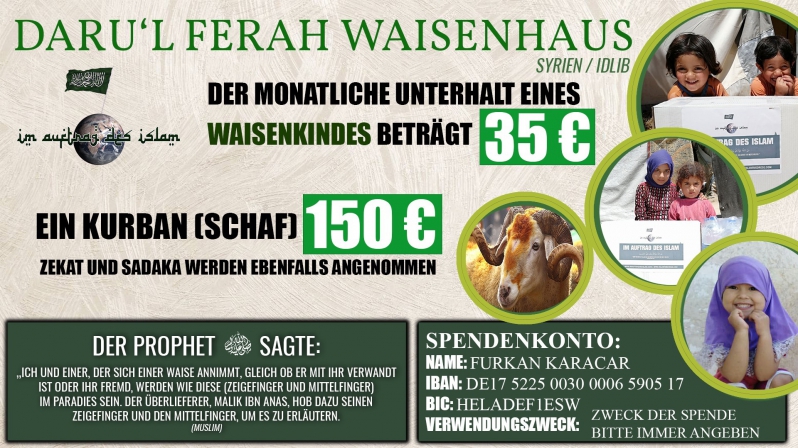 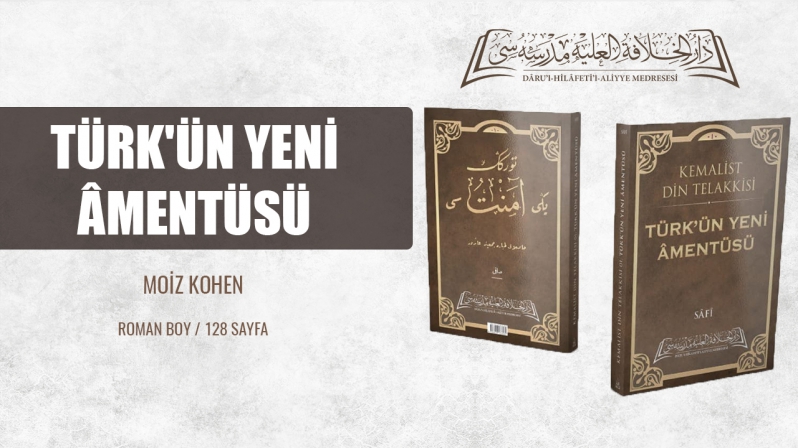 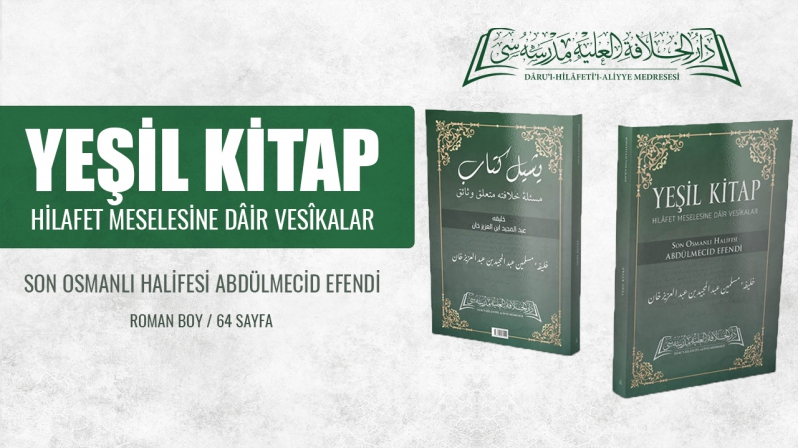 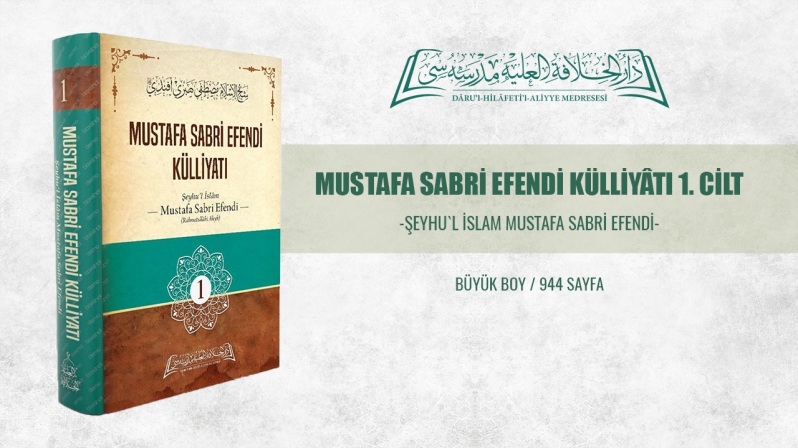 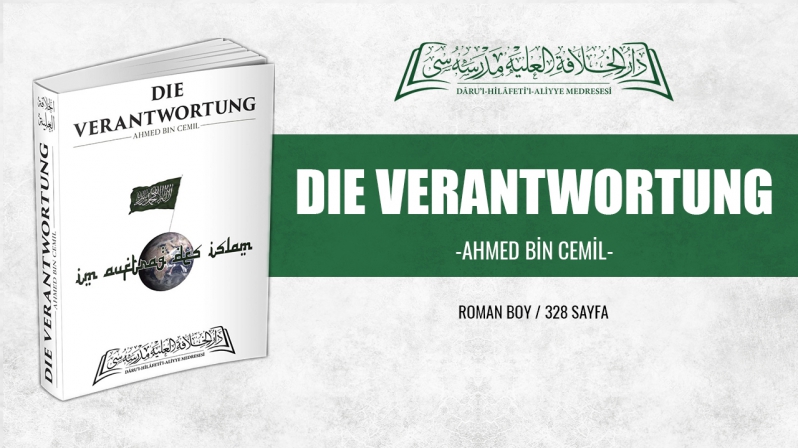 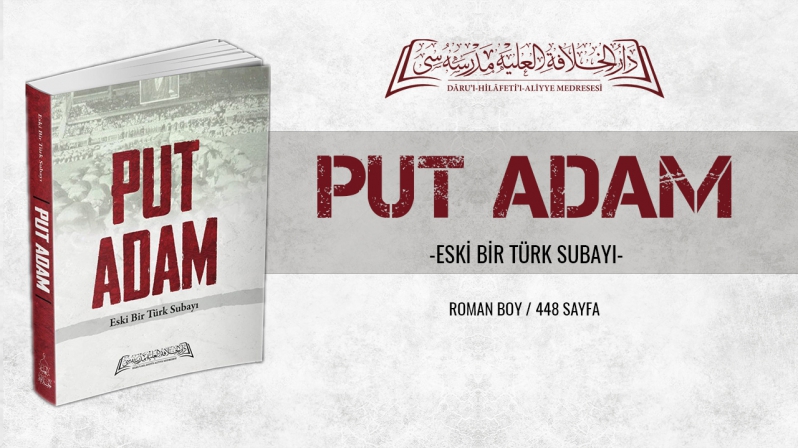 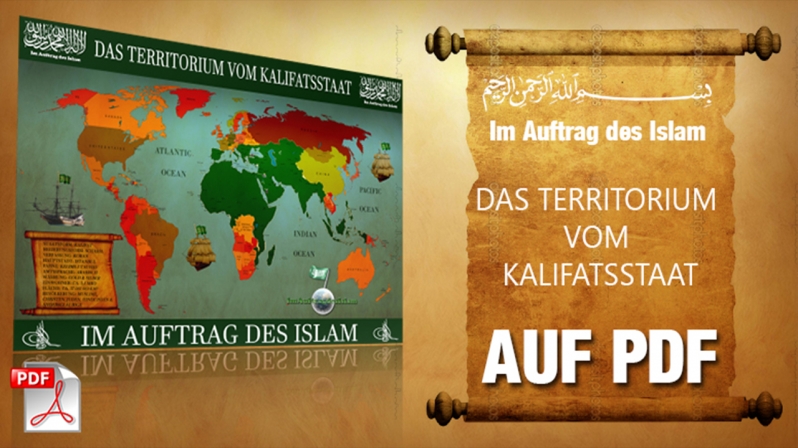 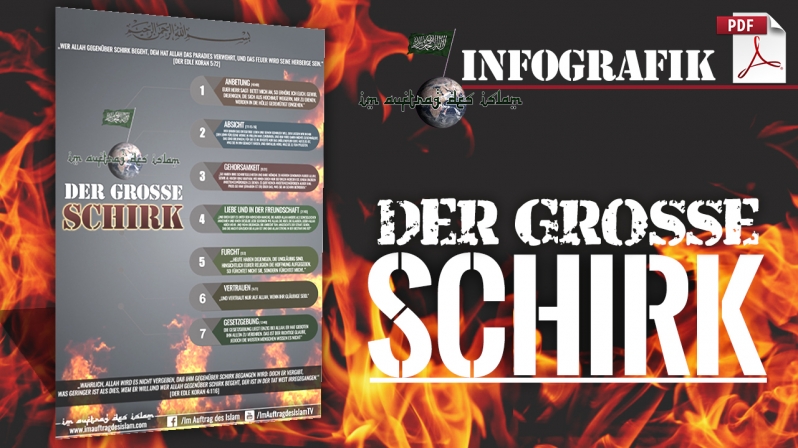 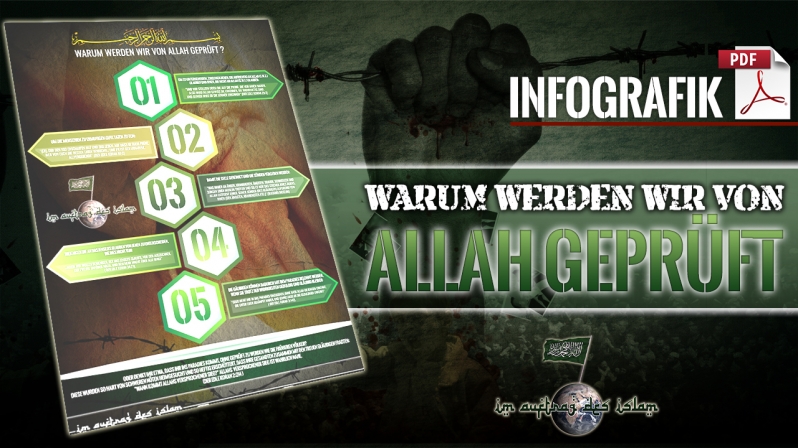 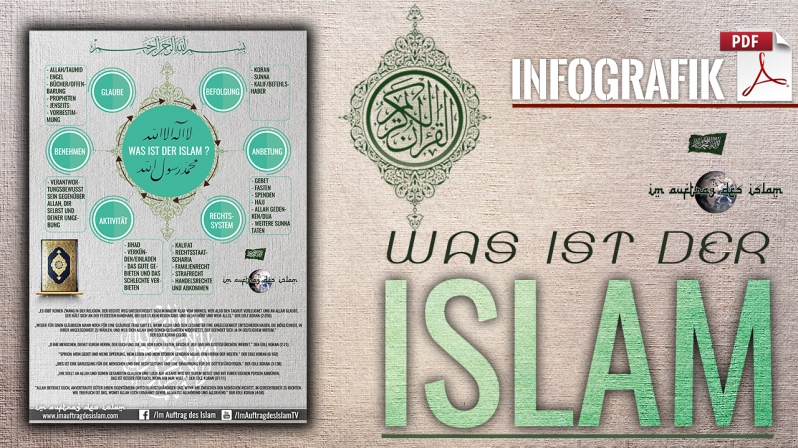 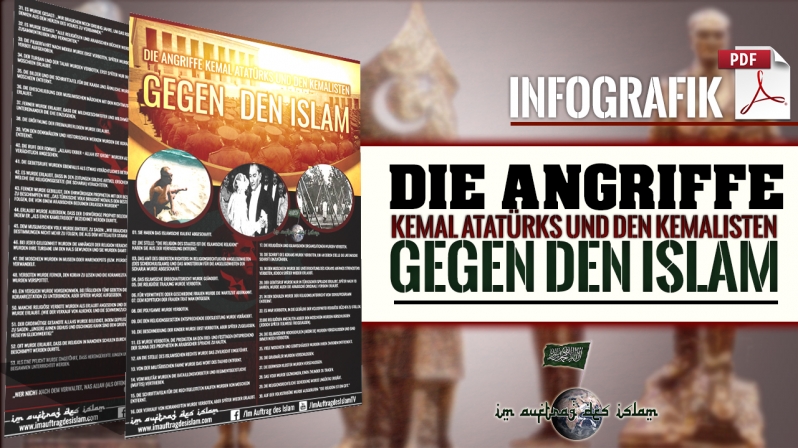 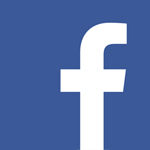 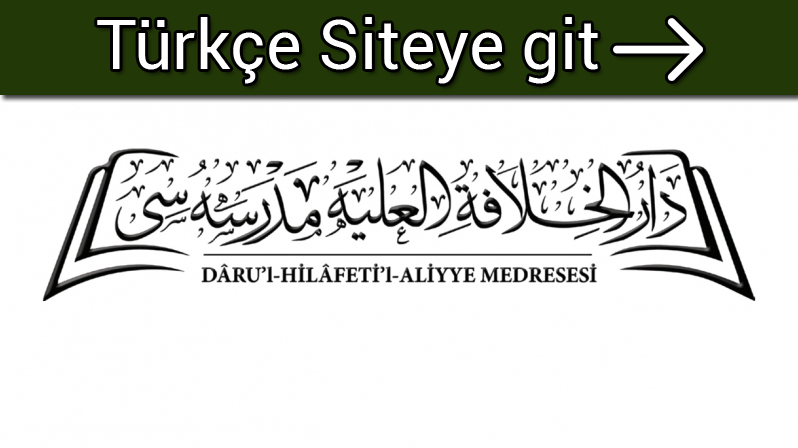